When I first planned our time in Puglia I thought that after our time in Lecce we would spend a few days in Ostuni. The more I thought about it, the more I wanted to stay out in a trullo, somewhere in the  countryside. I briefly considered Alberobello, but as much as I wanted to see this town famous for its concentration of trulli, I didn’t relish being in a town full of other tourists. After a brief search on airbnb I discovered Benedetta’s trullo located in the countryside a few miles outside of the town of Cisternino.

Upon exiting the highway our gps directed us onto a road that was no more than a little lane lined with stone walls winding through an ancient olive grove. There wasn’t anyone else around (thankfully as only one small car could fit on this road) and we were fascinated to be surrounded by trees that had been standing for hundreds of years. 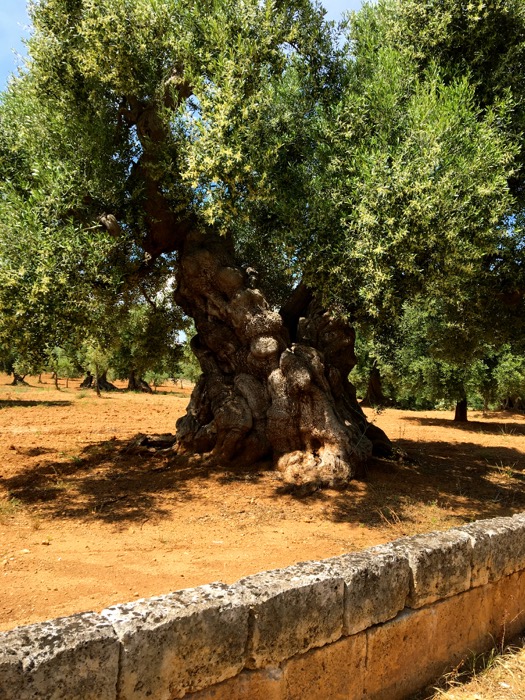 Benedetta had supplied us with very detailed directions to find her b & b, but we were eternally led in circles by our gps in the town of Cisterninno. Part of the problem was that a main street was closed due to the installation of lighting for an upcoming festival, the other part being we just had no clue where we were! After almost an hour of riding around she sent her brother to lead us in to their property. The ancient abandoned trullo below was an indication that we were almost there.

All the frustration of being lost slipped away as we rounded the bend in the driveway and pulled in front of our enchanting home for the next few days. I was immediately smitten and regretted that we wouldn’t be here longer.

The interior was just as charming as the exterior (I didn’t take photos so click on the link to the website). In addition to two bedrooms, living room and kitchen there was another dining room a few steps across the courtyard where we were served breakfast each morning.

Perhaps the biggest treat was the rooftop deck with views over the valley in all directions-the perfect spot for curling up with a good book and a must for relaxing with an evening cocktail. 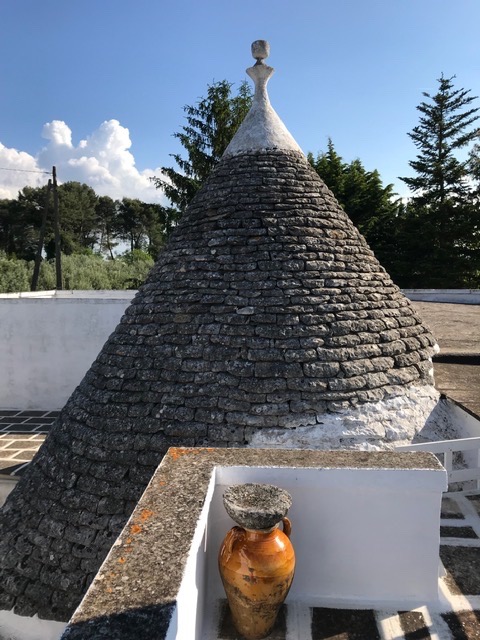 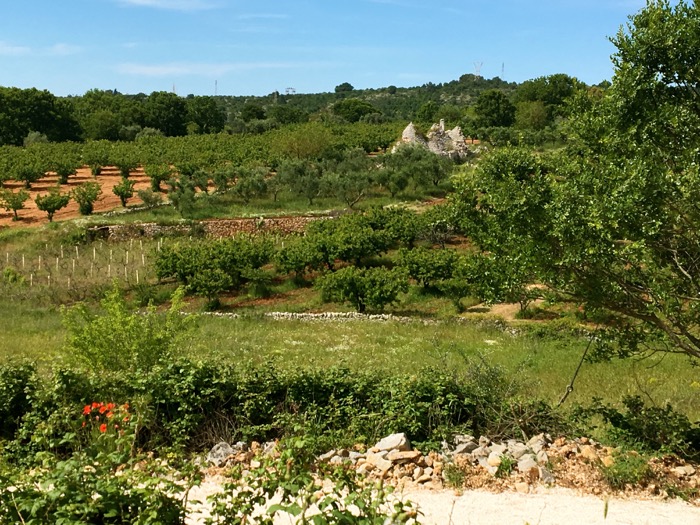 I took a walk on the road leading away from the property and passed fields of poppies studded with abandoned trulli, fruit trees and a few barking dogs which prompted me to turn around and head home. 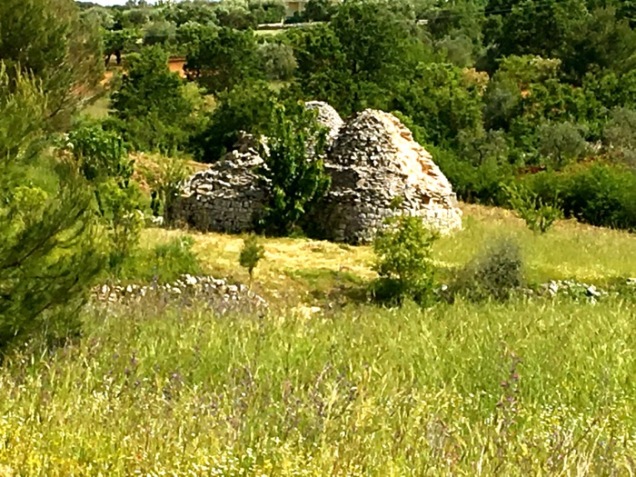 Benedetta had told us that her brother Giovanni was a passionate cook and so we asked him if he would prepare dinner for us. We were served an antipasto with enough food for a few more diners, but we did our best to make a dent in it-fresh fava beans with sun-dried tomatoes, knots of mozzarella, creamy stracchino cheese, bread, salami, local capocollo, marinated artichokes and our absolute favorite-poplettine di pane-crispy fried balls made with bread, milk egg and cheese. We devoured them! I plan on making these this week.

Our main course was orecchiette, hand made by Giovanni and dressed with fava beans from their garden and cherry tomatoes. Topped with grated cacioricotta cheese the pasta was toothsome, yet light and and very representative of the cuisine of Puglia. Accompanied by a local white wine it was everything we had hoped for. Thank you Giovanni for making our last evening so memorable!

Saying that it was hard to pack up and drive off a little after dawn the next morning was an understatement. I knew right then that we would return and spend a week here and do a lot more exploring in the Valle d’Itria.

One thought on “B & B Pietraviva-Cisternino”