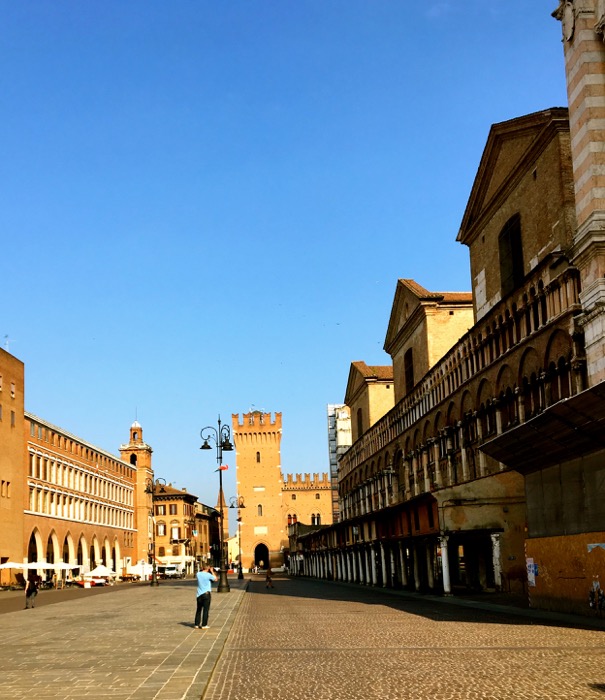 Have you been to Ferrara?  Some years ago I had planned on taking a day trip from Bologna (only about a half hour by train) and I just never made it. I’ve been thinking about it ever since we made a stop back in 2008 at a lovely agriturismo set in the countryside outside of the town (you can read about it here and here). 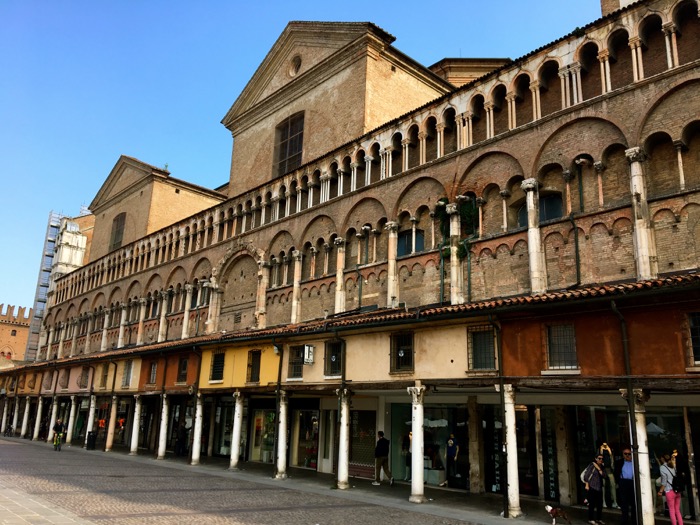 I planned four days for Ferrara at the end of our recent trip and I would have been happy to stay longer, a lot longer. As soon as we got settled in our apartment we set out to explore the town. Being a glorious sunny Saturday afternoon the main piazza was bustling, as were most of the streets in the auto free zone. After doing  some shopping for supplies in the local market we realized it was happy hour and time for a cocktail. The streets were lined with cafes crowded with locals enjoying the lovely spring weather and we were lucky to find a seat. 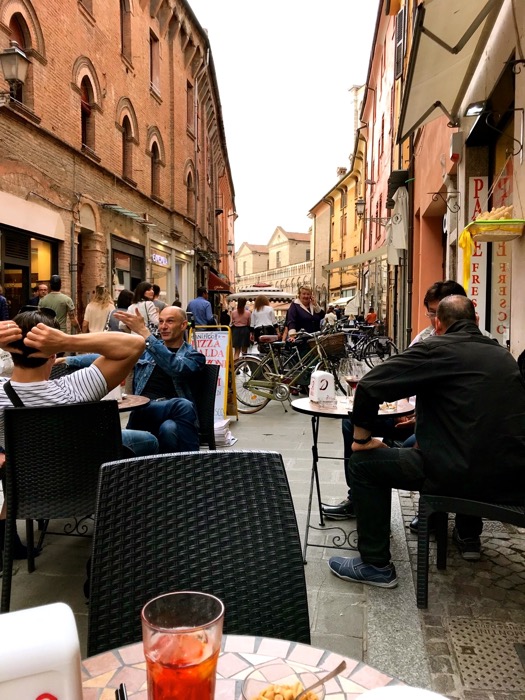 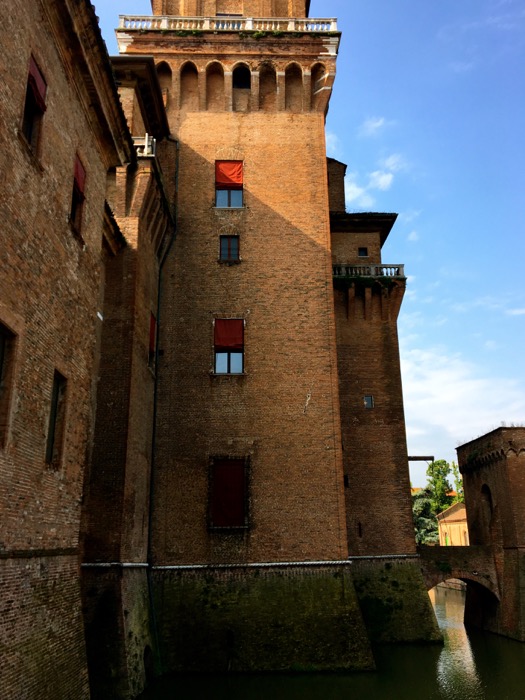 Ferrara reminded me a lot of Bologna, only a smaller, less touristy version. The only English we heard spoken in our time there was the charming young couple we happened to sit next to our first afternoon. They were with the US military and living right in town and were happy to share some of their favorite spots. 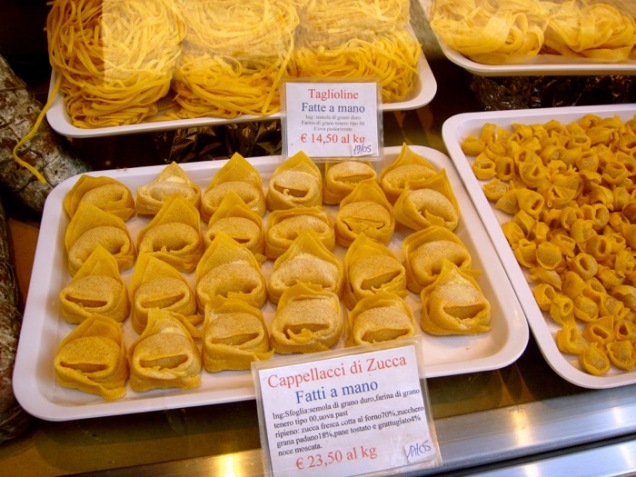 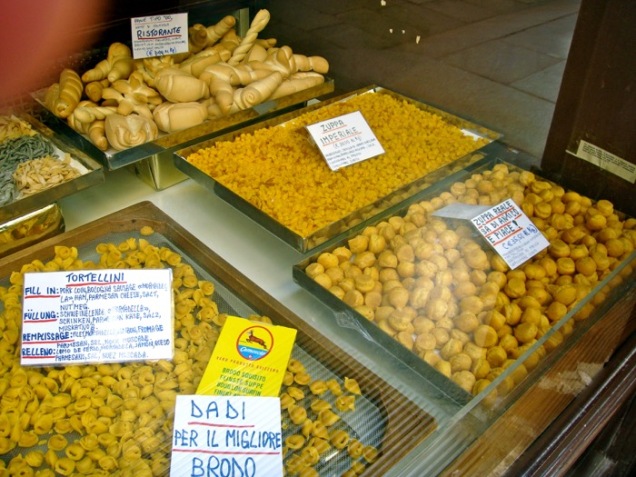 Ferrara’s cuisine is very similar to that of Bologna with handmade tortellini and cappellacci featured on just about every menu. Stuffed with squash, or meat they are incredibly light and are typically served in the classic bolognese meat sauce or with cream or butter and sage. Tortellini in brodo (floating in a rich chicken broth) is another classic dish which I wish I had sampled-there’s always next time… 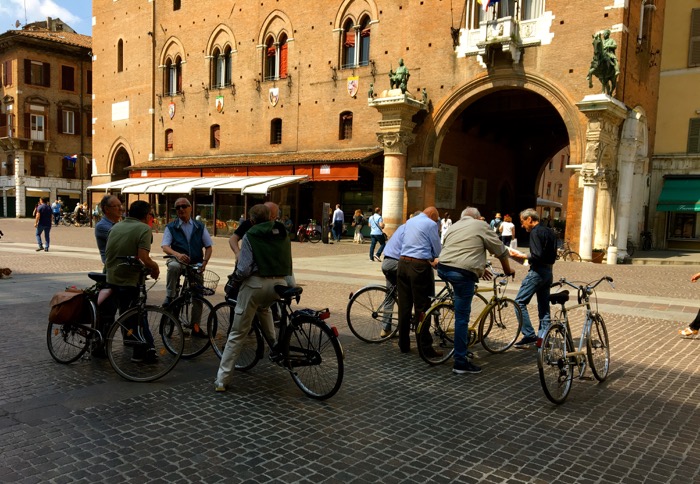 The town is perfectly flat and the locals bike everywhere. We saw children, elderly men and women, moms and dads with babies and even the woman delivering the mail on bikes. I loved this group of gentlemen having their morning meet up on their bicycles! 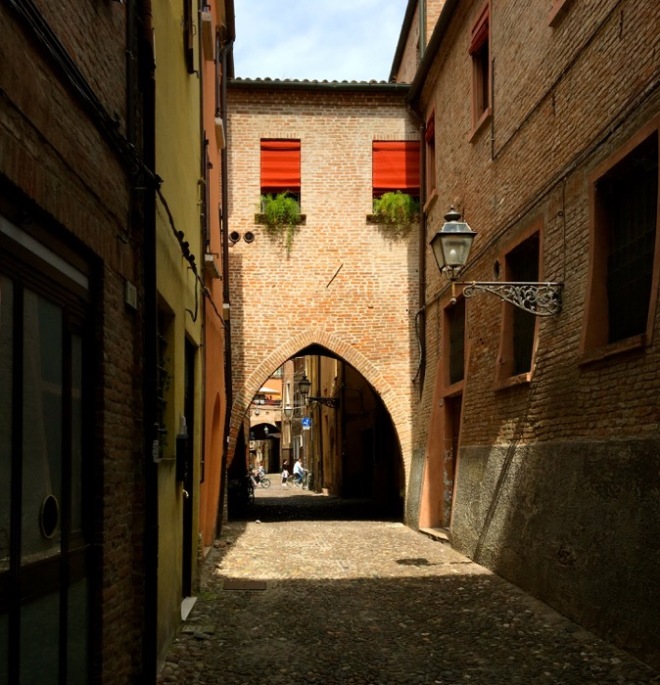 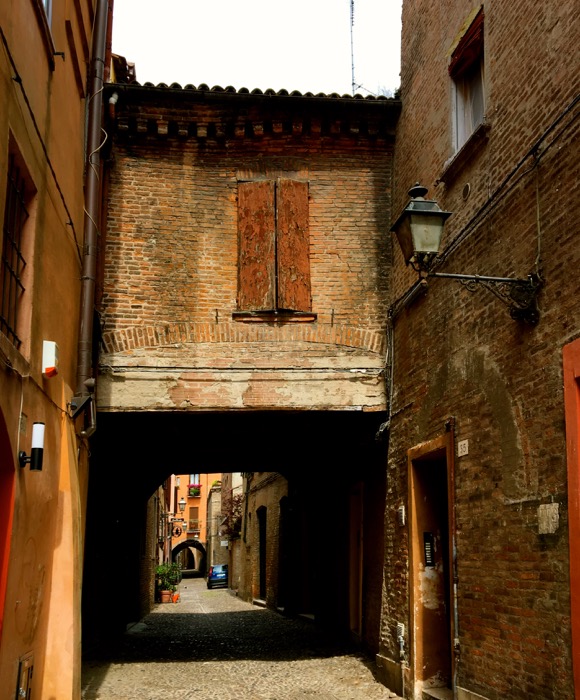 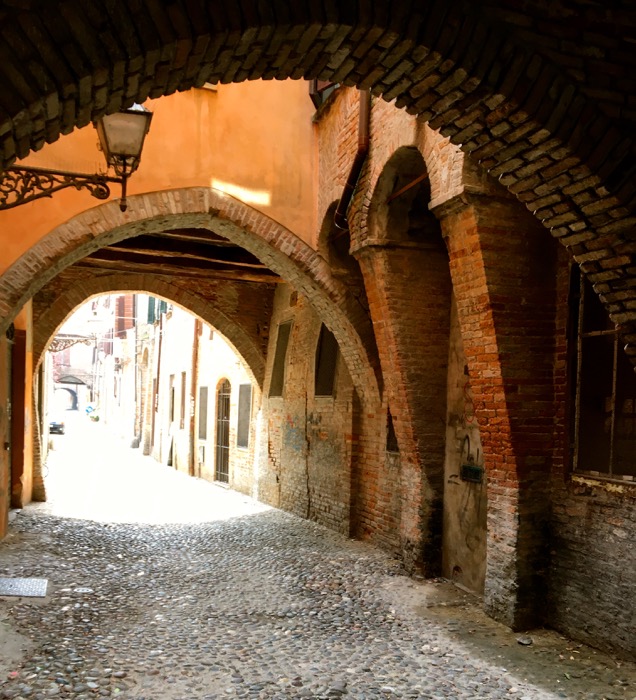 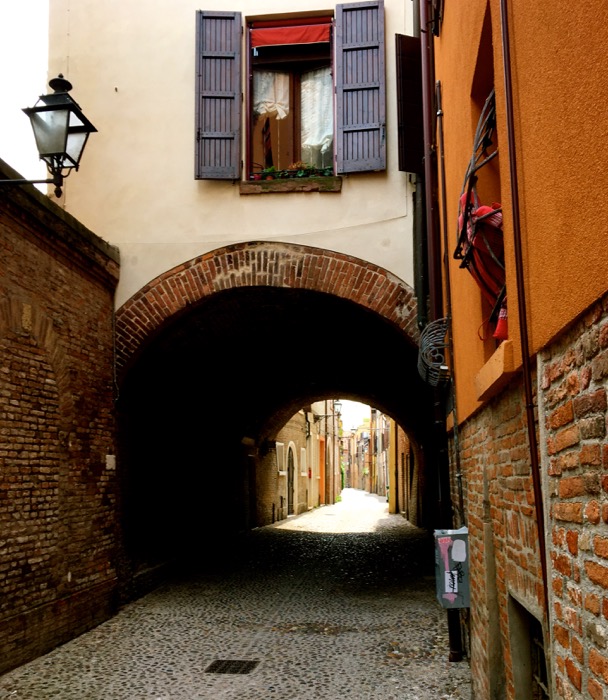 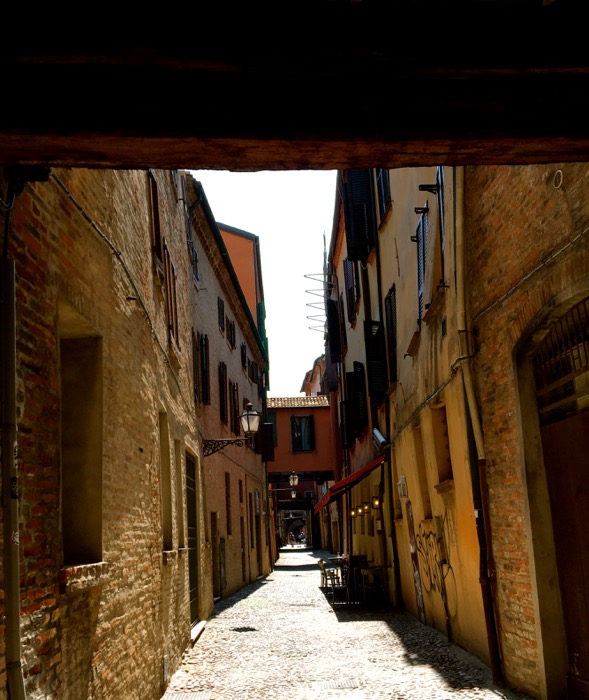 We spent our days wandering the streets and were charmed by Via delle Volte shown in the above photos. It’s one of Europe’s largest preserved medieval areas. We toured the castle built by the ruling Este family in the late 1300s complete with a moat.  The lower level held the dungeons where two young royals were imprisoned for their love affair and were later beheaded. After stooping and almost crawling into the cells I decided it would have been better to be sentenced to death rather than live for any amount of time in these dark and damp holes. 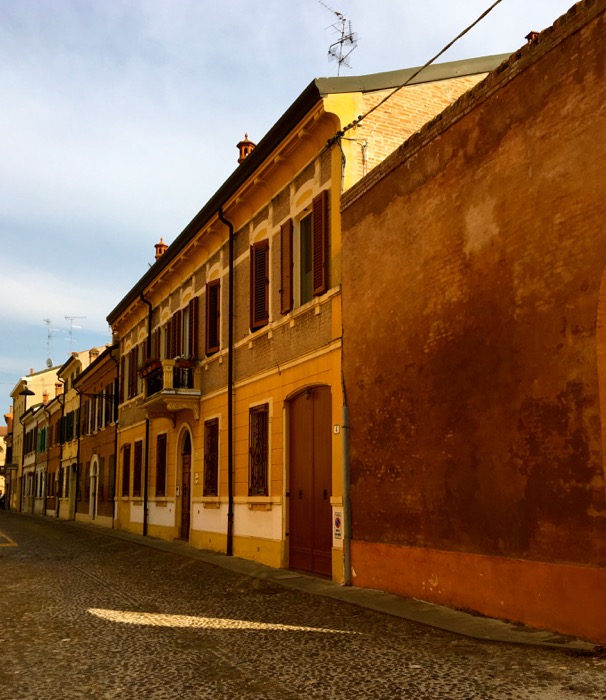 The neighborhood we stayed in was a few short blocks from the pedestrian zone with the main piazza, the duomo and the castle. It was charming and quiet and we discovered wonderful small food shops right in the neighborhood. We ate some of the best gelato of  our trip right down the street at La Romana–definitely worth a stop if you visit Ferrara. 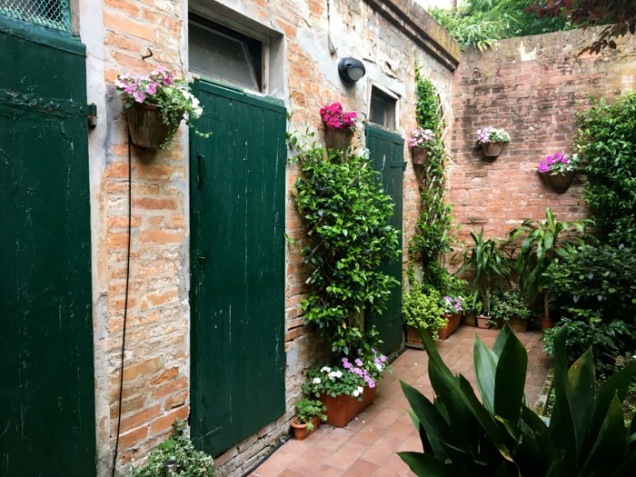 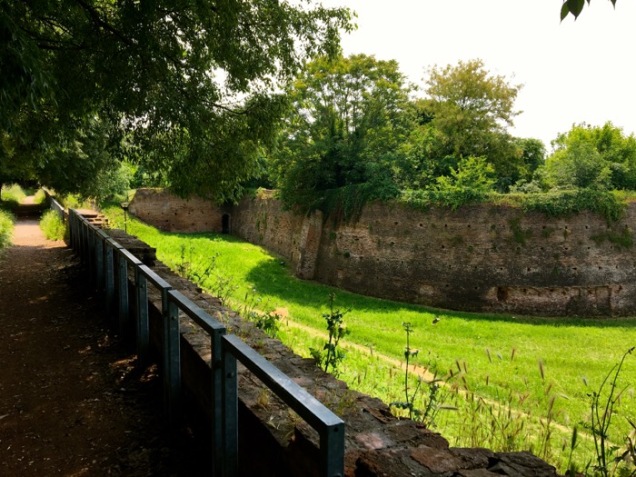 Our apartment was perfect-nicely appointed, with a kitchen stocked with a variety of treats for us and a brick lined patio with greenery surrounding the space-the perfect spot to enjoy an evening glass of local wine.

Similar to Lucca Ferrara does have a wall surrounding most of the town.  It’s not quite the same as Lucca’s very wide paved walkway, but you can stroll on a dirt lined pathway and down below is a beautiful park.

11 thoughts on “Falling For Ferrara”