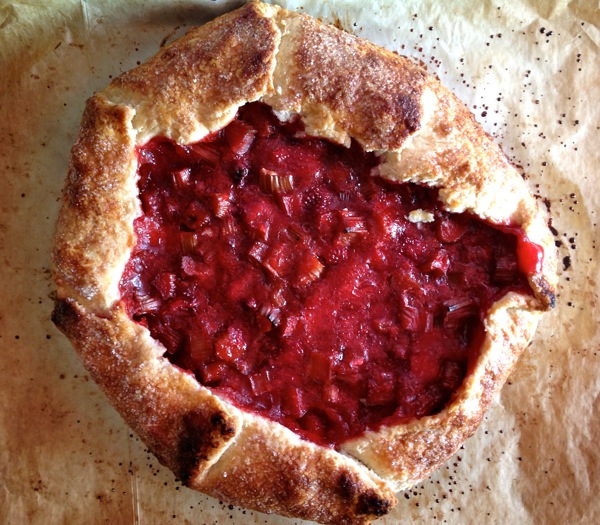 Time to break out the vanilla ice cream. It’s the perfect topping to this crostata featuring two of spring’s finest fruits-rhubarb and strawberries. You could substitute raspberries if you like, but I just couldn’t pass up the plump local strawberries being grown right down the road from our house.

A crostata is my favorite kind of tart since the dough is very forgiving. You roll it out and simply fold the dough up over your filling. If it’s not perfectly round, no big deal! I’ve used this dough for tarts both savory and sweet with great success. Make the dough a day or two ahead and keep it in the fridge. Take it out about 15 minutes before you want to bake your crostata and you’re good to go.

In a bowl toss flour with sugar and salt. Cut in the butter until the mixture resembles coarse meal. Using a fork, stir in the ice water by tablespoons until the dough holds together when pressed. Sprinkle in more water if needed. Flatten the dough into a disk, wrap well and refrigerate for at least 15 minutes before rolling out.

For filling:
Dissolve cornstarch in 3 tablespoons water in a small bowl; set aside. Combine rhubarb, strawberries, and sugar in a large heavy saucepan. Cook over medium heat, stirring often, until sugar dissolves and juices are released, about 4 minutes. Stir in cornstarch mixture and bring to a boil (rhubarb will not be tender and slices will still be intact). Transfer to a bowl. Chill until cool, about 30 minutes.

Preheat oven to 400°F Roll out dough on floured parchment paper to 12″ round; brush with beaten egg. Mound filling in center of crust; gently spread out, leaving 1 1/2″ border. Gently fold edges of dough over filling, pleating as needed. Brush border with egg; sprinkle with raw sugar. Slide parchment with crostata onto a large rimmed baking sheet and bake until crust is golden brown and filling is bubbly, about 45 minutes. Let crostata cool on baking sheet on a rack. Transfer crostata to a platter, cut into wedges, and serve with whipped cream or ice cream.

***Here’s a shout out to Linda from Temecula who recently attended the Tea With Betty event in San Juan Capistrano. I heard you met a friend of mine. Thanks so much for following my blog!***