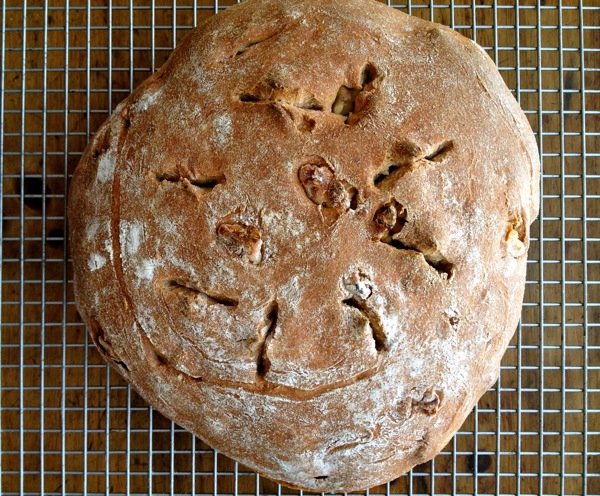 I’ve been on a mission to browse through many of the forgotten cookbooks that line my bookshelves. It’s been fun getting reacquainted with some old favorites and finding inspiration for some new dishes.

As soon as I saw this recipe for walnut bread in Susan Herrmann Loomis’ book-On Rue Tatin– I knew that there would be homemade bread in our future. I considered making it last weekend until I read the list of ingredients and realized that spelt flour was not a staple in my cupboard. I think I visited about 4 stores before I found it.

Have you used spelt in your baking? I have to admit that I didn’t know much about it except that it’s considered an “ancient grain”. I read that it’s a red wheat that when combined with water and yeast it reacts quickly, rises well and once baked its has a cake-like texture.

My loaf didn’t actually rise to new heights-maybe it was the yeast-but the finished product was delicious. It was just as I had hoped with a great crust and a somewhat dense crumb. It’s perfect toasted and slathered with butter and just as good topped with a sharp cheddar and a little chutney. 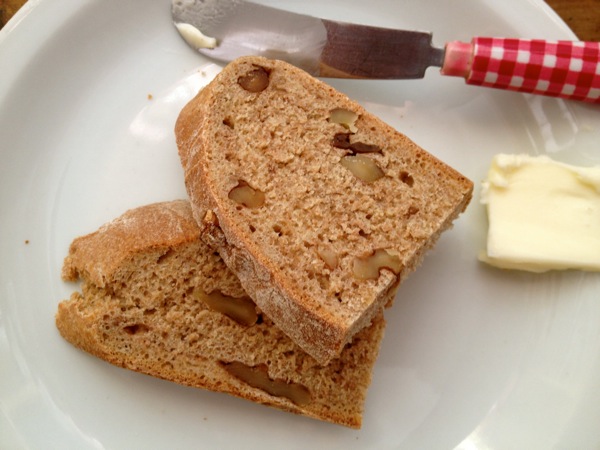 Place the yeast and water in the bowl of an electric mixer and stir. Add i cup of the all-purpose flour, stir well and let sit until little patches of bubbles rise to the surface of the water, about 5 minutes.

Add the remaining 1 cup of all-purpose flour, stir, add the salt and stir again. Add the spelt flour one cup at a time until 5 cups are incorporated. Cover the bowl and let the dough rise for an hour.

Dust two 9-1/2 inch cake pans with flour. Dust the loaves all over with flour and transfer them to the pans. Cover them loosely with a towel and let rise until doubled in bulk, about 1-1/2 hours.

Preheat the oven to 425 degrees.

Snip the top of the loaves in several places. Immediately place them in the center of the oven and bake until they are golden brown and sound hollow when you tap them on the bottom, about 30 minutes. Remove from the oven and turn out onto a wire rack to cool.