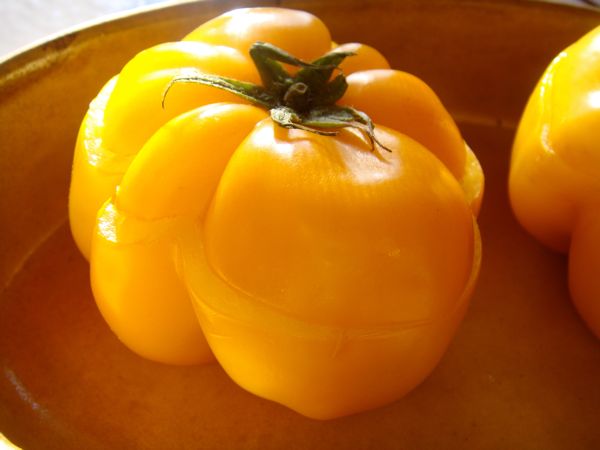 At first glance, you would probably identify this as a yellow pepper. ‘Tis the season for big peppers, perfect for stuffing, but this is no pepper. It’s a “stuffing tomato” that I bought yesterday at the mid-week farmers’ market. I apologize for not taking a photo when I first sliced the top and peered inside. It was almost hollow, just like a bell pepper, with a tiny, fleshy bundle of seeds. 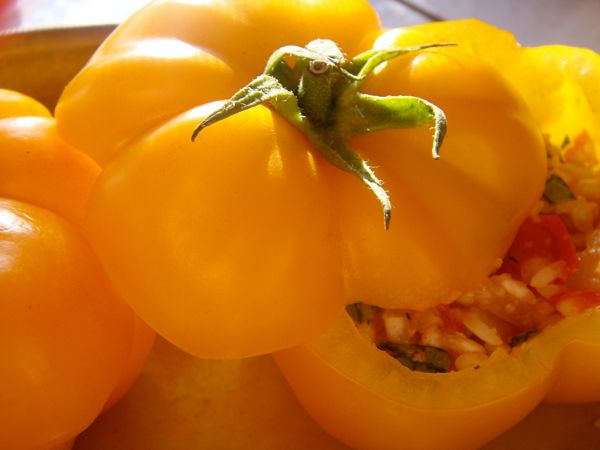 I decided to go with a recipe for stuffed tomatoes that I first tried last year after seeing them on Judy’s blog- Over A Tuscan Stove. Last year when I made them, they cooked in the prescribed time and the rice was perfect. Last night the rice took forever to soften up, which I attribute to the fact that there was little or no moisture inside of these interesting shaped tomatoes. Would I buy these tomatoes again? Probably but I wouldn’t stuff them with uncooked rice! I think they would be great heaped with ground lamb, pine nuts, toasted bread crumbs,and then baked. I’ll let you know how it goes.