With Sheep You Get …

The sheep are the hint as to why we made the journey up into the Garfagnana. I have a thing for cheese. I dream of someday doing an internship on a farm where I can learn the art of cheese making. When I first decided on bringing a group to Lucca I began the search for a farm where we could see them make cheese. With sheep you get pecorino. We’ve been eating it all week here in Lucca, so why not go to the source?

We pulled up to the little farm in the middle of nowhere about ten in the morning-just in time for the show to begin. The sheep are milked twice a day. The evening milk can be held overnight and blended with the milk from the morning. The first step is to heat the milk in this fabulous copper cauldron. It’s left on the heat for about 40 minutes and at some point rennet is added (I can’t remember if it was at the beginning or after the 40 minutes). Then the mixture is stirred around with a giant wooden rake like stick. 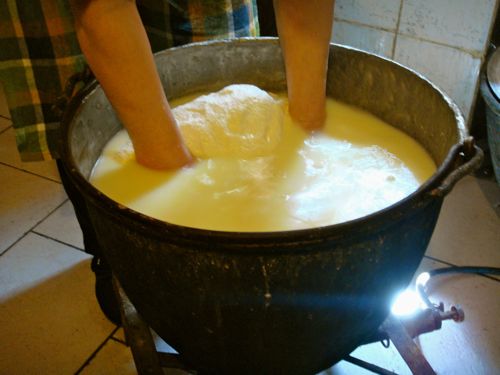 At some point a mass starts to coagulate at the bottom of the pot. The mama at this fattoria (farm) was the one responsible for forming the cheese. She was up to her elbows in the warm milk and was sort of kneading the cheese to form it into one large piece. At this point she was joined by her husband who handed her a large knife. She cut the cheese into three large pieces and he was at the sink ready to place each piece into a container with holes in it. His job was to pack the cheese and then turned each piece over in its form a few times.

When the cheese was packed into its forms the process for making ricotta with the leftover milk began. I was fascinated that two kinds of cheese were made there right before our eyes and it really didn’t take that long.The proud papa finished up the ricotta and then passed around spoons for us to taste it while it was still warm. Amazing and so incredibly delicious.

Here’s a peek at the rounds of pecorino aging in the cool cellar beneath the house.

Autumn In Tuscany-Cook With Panini Girl In Lucca